From Jamming to the Avocado

What is there in the sound of a beat? As a drummer myself, I tell you it can do wonders! I have experienced that through my musical journey with friends affected by autism. I want to share with you what I have learned from them, and how I have further developed my initiative to reach the larger community.

There is emerging research which indicates drumming improves motor skills, concentration and communication, and it also benefits those with autism. I was particularly inspired by Different Drummer by Jeff Strong and The Distracted Mind by Adam Gazzaley and Larry Rosen, and I felt even I could do something to help those around me. My school community includes students with autism. With my headmaster’s blessing, I started group percussion sessions with those students in 2019. I led regular sessions with different musical activities like drumming to a backing track and drum rolling. Besides drums, other percussion instruments were also used, such as egg shakers, boom whackers, tambourines, wood blocks, and castanets. Many were selected with a view to capturing my friends’ attention. Whilst I am no therapist, I noticed my friends were generally more engaged when playing instruments that were softer in texture and quieter in sound. The latter could be attributed to their dislike of overly loud noises. Indeed, research suggests that loud noises above 70 decibels would cause discomfort to autistic people. On the other hand, some instruments would help calm them, like the African drums which could make the most mesmerizing sound. Apparently our brains are rhythmically organized, and they pulsate with the sound we hear. So a slow pulsating sound would help calm the listener. Anyhow, regardless of the activity or instrument, my friends were noticeably more excited when playing percussion music than attending their regular classes! Some of them were literally dancing to the music. Even the timid ones were gently swaying or nodding their heads to the beat. On several occasions, they were having so much fun that they did not want to leave after the sessions had ended.

Founding of March To Your Beat and Summer Outreach

Encouraged by the positive responses from my friends, I wanted the initiative to benefit a wider audience. So I founded March To Your Beat [marchtoyourbeat.hk] in 2020 as a platform not only for sharing what I do but also for attracting like-minded people to join the cause. With the help of volunteers, this initiative was taken to other special needs schools in Hong Kong during the summer holidays.

Tinkling with technologies and inventing instruments

As March To Your Beat started to take shape, the music sessions also took on more sophistication. I began to look for ways to measure the benefits exhibited by my friends to test the assumption from my initial observations that music would benefit them. In this regard, I turned to accessible technology. For example, I used motion sensors to evaluate motor coordination, and emotion sensors to track mood, heart rate, and stress levels. Decibel meters were also used to control the sound level of the music sessions to prevent participants’ discomfort.

My tinkling with technologies was fun but results were mixed. However, a common observation I made was that the participants would get stressed easily. One of our activities involved using egg shakers to help them relax, so I wondered how I could perhaps incorporate what I had learned about sound and texture into a better version of the egg shaker. I also felt the soft squeezability of a stress ball might be useful. So I invented and designed the Avocado. I envisioned the device to be slightly larger than an egg shaker for better grip, but the outer shell should be soft like a stress ball. The cross-section of the device would resemble an avocado, hence the name. The flesh of the avocado would be that squeezy material of a stress ball. The seed would be a collapsible air chamber containing the beads that would make the sound when shaken. If a person is stressed and squeezes the Avocado too tightly, then it will make little or no sound. It is almost as if the instrument reacts to the user’s stress by saying, “Relax, if you wish to be heard!” For the prototype, I halved a polystyrene egg, and hollowed out the center for encasing a collapsible air chamber, which I salvaged from a squeaky toy hammer. The rim of the halved polystyrene egg was lined with springs to help re-inflate the air chamber when not squeezed. The two halves were then stuffed inside a latex balloon to hold them together.

The Making of the Prototype 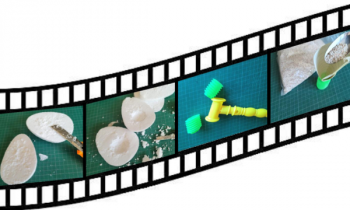 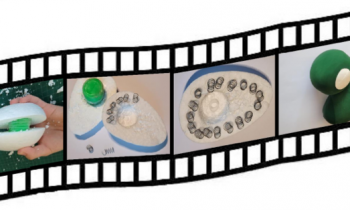 The prototype may be crude but the idea is there. Obviously it would benefit from further R&D by incorporating motion sensors or other technologies. The prototype could also be improved so that it could be squeezed in all directions, i.e. 3D rather than the current 2D sandwich structure of a polystyrene shell.

Pitching at UNITAR and Future of March to Your Beat

I was recently able to speak at the Youth Ambassador program of the United Nations Institute for Training and Research. There, I met an ambitious cohort of students, many of whom were interested in joining March to Your Beat as potential partners, both in Hong Kong and abroad. Over the next year, I hope to inspire more like-minded youth musicians to contribute their respective skills to uplift the special needs community.